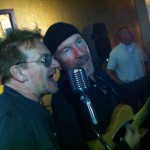 How would you like to have been The Fly on the wall at La Osteria, the restaurant/bar that 3/4ths of the group U2 just casually walked into last Friday night? “Am I drunk or did Bono just walk by me?” Well, since Bono’s not answering my calls, U2radio.com did the next best thing and reached out to La Osteria owner, Fernando Hernández for a little sit down chat about U2’s visit to their establishment. Bon appetite!

U2radio.com (U2R): How did U2 come to your restaurant/bar? Was it planned or spontaneous?

La Osteria (LO): Spontaneous. They request(ed) a place to go after dinner, and a friend of mine that works for El Dorado, where they were staying, likes La Osteria and recommended them to go.

U2R: What was the reaction of the staff and clientele?

LO: La Osteria is a small place that can seat 90 people, so employees and clients were very surprise(d)… to see Larry coming in and going direct to the drums and star playing. I own the place, and it (felt) like… everything was planned ahead, everything went so smooth. After Larry, The Edge start(ed) playing the guitar and Bono singing and everything, but it wasn’t planned.

U2R: Was there any interaction between the patrons and the band? If so, can you tell us what was said?

LO: They were incredibl(y) nice with everyone, when I approach to welcome them, they first say thank you for having us at your place, they interact(ed) with some locals and tourists from Los Angeles, and I just thank(ed) them for been there. I said “this is a big thing for my place, and I do not have words to thank you enough.”

U2R: Do you know why U2 chose to play “Desire”? We’re they taking any requests?

U2R: How long were they there before they began to play? What did they do after they played? 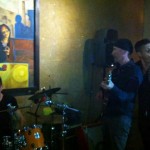 LO: They play(ed) right when they walk in to the place. I want to believe that everything was aligned that night to happen, and that even if the place is not pretentious, and is simple and rustic, they felt the magic of the place and the people. La Osteria is a place where locals go and it feels like a family having fun. If you walk (in) for the first time you feel…a very special and attractive atmosphere. After playing, the went to their table and (had) some tequila, Mexican beer and red wine, then Larry and The Edge were dancing with some girls from Los Angeles, and after that, they just have fun there.

U2R: Was this the 1st time a celebrity entered your establishment? If not, who else has been there?

LO: I own a restaurant in San José del Cabo named Tequila for 18 years, we have had many celebrities like Serena Williams, Kevin Costner, Sharon Stone, Ringo Star, Robin Williams and many more, but in La Osteria, (we’ve) never (had) a celebrity that we know.

U2R: Was anyone with U2? Wives, kids, managers?

LO: No wives or kids, just an assistant – a very nice girl – and two more guys.

LO: No they did not mention anything about the new material. 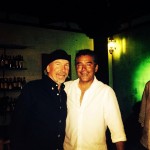 U2radio.com: Where was Adam?
LO: Adam wasn´t with them. They are so educate(d) and so nice, that when someone (would) ask them for a photograph, they always (stood) up and (gave) a good pose and time. In 25 years, I have met in my work more than 200 celebrities and they are the nicest I have met. In the past, I always (said) to my wife, when I pass away throw a good party, and play U2 music. I hope you understand my poor English

U2R: Your English was fine. Thank you for your time.