I’ve heard and read a lot of reasons over the years that people have for hating U2, especially Bono, but none of them have ever been that the band were rude or anything less than gracious in person. It must get old to not be able to leave the house without being pestered for autographs and pictures, and any one of the four members of U2 would be well within their rights to tell the occasional fan to go away, but I’ve never heard of such a thing happening. 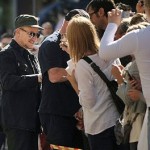 For myself, the last time I met Bono, he was kind and solicitous, far beyond what I had any right to expect, and I won’t ever forget it. I was thinking tonight about that, and then a phrase that I’ve heard from Bono hundreds of times popped into my head. You’ve probably heard it yourself. That phrase is “Thanks for giving us a great life” and it occurred to me that as much as people criticize U2 as being arrogant and full of themselves, they are actually very humble and very grateful. I love that they’re grateful to their fans, because that surely must be at least part of the reason why they make themselves so approachable, don’t you think? They know that the punter on the street corner asking for a moment of their time has bought at least a record or two, probably some tickets and merchandise, as well. How cool is it that they still appreciate the little guys (and gals) who made their ascent possible? I think it’s totally awesome and beautiful, and it’s just one more reason that I love U2.