“What do they sing in DC?” I will never forget when Bono looked down at me at the tip of the heart at the first Elevation show in DC and asked me that after “Desire.” I just froze. I was still in awe of being THAT close to Larry. Then Bono sang “Ground Beneath Her Feet” to the girl three down from me. He messed up one of the lines, I laughed, Bono looked at me and smiled. I was sick at this first show at the MCI Center on June 14th, but those personal moments made up for it. The set list for the Elevation show in DC on June 14, 2001 was as follows: Elevation, Beautiful Day, Until the End of the World, Mysterious Ways, Kite, Gone, New York, I Will Follow, Sunday Bloody Sunday / Get Up Stand Up, Stuck In a Moment, In a Little While, Desire / Gloria, The Ground Beneath Her Feet, Bad / Wild Horses / 40, Where the Streets Have No Name, Pride, Bullet the Blue Sky, With or Without You, One, Walk On. 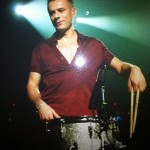 For the second Elevation show in DC show on June 15, I did not spend much time in the GA line. Instead I slept in the hotel room, hung out with my friends in local air conditioned stores near the MCI Center. Instead of standing at the tip of the heart as I did at the first show, I stood at the front rail in front of Adam. U2 played “11 O’Clock Tick Tock,” “Sweetest Thing,” “New Year’s Day,” and “All I Want is You,” but they did not play “Gone” or “Bad.” DC2 was a really great show – up there with Boston4 and Philly2. Great crowd energy! The full set list for the second Elevation show in DC on June 15, 2001 was as follows: Elevation, Beautiful Day, Until the End of the World, New Year’s Day, Stuck In a Moment, Kite, New York, 11 O’Clock Tick Tock, Sunday Bloody Sunday / Get Up Stand Up, Sweetest Thing, Desire, Stay, All I Want Is You, Where the Streets Have No Name, Mysterious Ways, The Fly, Bullet the Blue Sky, With or Without You, Pride, One, Walk On / Hallelujah.