As I matured in my U2 fandom, there was a period of transition from collecting albums to hunting down more obscure tracks, like one-offs for soundtracks and collaborations with other artists. One of my favorite discoveries from this period was the 1993 B-side, from the Stay single, “Slow Dancing“, which was originally written by Bono circa 1989 for Willie Nelson to perform.

In my late teens and early twenties, I spent a lot of time trying to understand women and why they made me feel like they did, their reactions and motivations, and the strange power they had over me. Much of what I learned and figured out came from Bono and U2, and the lyrics to this song contains two lines that still stand up for me today as some of the truest, most poetic and poignant pieces of song-craft which I’ve ever heard.

The first comes at the start of the second verse. Now, I’ve always been…transparent. I know that I’m sensitive and emotional, sometimes overly so, and I wear my feelings right on my sleeve. When I was 17 and 18, it wasn’t uncommon for me to be found with “scarlet eyes”, from some crying jag – I was once even referred to as “that crying sweaty guy” – and all I wanted was someone who could look at me and not see a victim, so the line “scarlet eyes and a see-through heart; she saw me coming right from the start” really described much of the antagonistic relationships I had with women at that time in my life.

I took a lot of comfort in knowing that there was someone out there who knew how I felt. Even all this years later, I still feel a strong kinship with Bono, especially, and when I think back over my life, I think that this song was the first time I felt that. 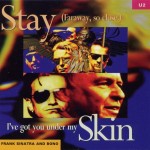 The other lyric that moved me so deeply was “she left with my conscience – I don’t want it back, it just gets in the way.” I don’t know if I’ve ever heard a better description of what it’s like to lose your innocence. I knew then that I was making mistakes that could haunt me for the rest of my life, but I didn’t care one iota. It took me a long time to get to a place in my life where I was OK enough with myself that I wasn’t willing to sell out every single principle I held for the company and affection of any woman, even the wrong one. Once you’ve had a taste, once you’ve crossed over to “the dark side”, there’s no going back. Depending on what day you ask me, my answer as to whether or not that’s a good thing might vary dramatically. 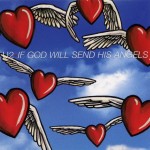 As befits a B-side, even one as amazing as this, “Slow Dancing” hasn’t made very many appearances from the live stage. In fact, it’s only been performed live during a U2 concert 12 times, and not at all since 2001. Willie did record a version of the song, at least, finally joining up with the band to lay the track down for the 1997 If God Will Send His Angels single, and there’s a neat video of Willie Nelson and U2 performing the song that you can find right here on YouTube.

It’s a good thing that videos like this exist, too, that moments like this were captured, because I’ve got a feeling that as the band attempts to connect with a new generation of fans, it’ll become more and more unlikely that older obscurities like “Slow Dancing” will get much love at all. The song, and others like it, will always be there, though, waiting to be discovered as new U2ers make that transition from fan to fanatic.