Let it be known that the campaign to LET LARRY SING started here! And why not? U2 was in fact originally called The Larry Mullen Band. Without Larry, there would be no U2. So why not let the founder of the band sing once in a while, maybe just one song per concert?

Larry used to sing. Back in the days of the War and Joshua Tree tours, Larry had a microphone attached to his drum kit and sang back up. During the ZooTv tour, Larry would often sing the old Irish favorite “Dirty Old Town.” It wasn’t pretty, but when I saw him walk to the front of that stage at Giants Stadium on the Outside Broadcast Tour opener, I almost fell off my chair. (Remember when there used to be floor seating instead of general admission standing room only?) Also on the ZooTv tour, Larry would also chime in when U2 covered Abba’s “Dancing Queen.” Bono would put the microphone in front of Larry who would sing “Oh Yeah” after Bono’s “Oh oh oh oh oh oh’s.”

During the Popmart and Elevation tours, Larry did not sing at all. I don’t even think he had a microphone for back up singing. Larry did not get to the microphone again until the Vertigo Tour, but it was really more of a screaming than actual singing. During “Love and Peace or else?,” Bono would put the microphone in front of Larry and while playing his conga on the catwalk, Larry would shout repeatedly, “RELEASE RELEASE!” 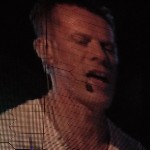 Larry did not have his own microphone again until U2’s 360 Tour in 2009. Larry sang back up on “Unknown Caller” and on “Moment of Surrender.” Similar to his cameo on “Love and Peace,” Larry sang (er shouted) “LET ME IN THE SOUND!” repeatedly during “Get on Your Boots” while pounding the drum and standing back to back with Bono. This was obviously my favorite part of each of the 24 360 shows I saw. If you have any recording or video of “Get on Your Boots,” that squeal you hear during “Let me in the sound” is mine. The 360 Tour also marked the return of Larry actually singing a song. He didn’t come to the front of the stage, and it was not a full song, but Larry did sing. At the show in Oakland on June 7, 2011, Bono was talking about the G3 Summit the night before with Greenday and Metallica and the possibility of the three bands playing a music festival together. Edge spoke a bit about it, and then 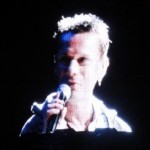 Bono asked Larry what else was discussed. Larry said, “What goes on at that summit, stays at that summit.” Bono asked Larry if any individuals’ names came up. He responded, “Lou Reed perhaps,” and then Larry sang a bit of Lou Reed’s “Perfect Day.“ Larry concluded by saying, “Lou, we love you man.” Lou Reed was at the show that night. I couldn’t believe Larry sang! And what was even more surprising was that Larry actually sounded good.  Larry can sing! So join me in the campaign to LET LARRY SING!