My musical journey of the past 22 years, on the road with U2 from the Zoo Tv tour to the 360 tour, has taken me to many places, introduced to me to great people, and taught me valuable life lessons. Of the 75 U2 concerts I have attended, the second show in Anaheim, California, on the last leg of the 360 Tour, is one of my favorites. Besides having a great set list, it taught me a crucial life lesson: Forget logic, follow your Passion. Actually, I already knew this one, but this show validated it for me.

I had always wanted to drive across the country, and I had always wanted to follow U2 on tour – the whole tour. That is exactly what I did in the summer of 2011. Unemployed and poor, I packed up my car and my dogs, and I left our house for almost three months, driving to every U2 show in the United States on the last leg of the 360 Tour. We drove over 18,000 miles through 31 states to get to all 16 U.S. shows. Some drives were tough, like Michigan to Miami, and Miami to Nashville, but none was more difficult than the 2,700-mile drive from California to Maryland. I had just three days to make it from the second Anaheim show to the Baltimore show. 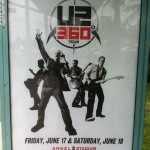 Anaheim was the only city in the U.S. where U2 played back-to-back shows on that final leg of the 360 tour. I almost didn’t go to the second show because it was on a Saturday night, and I had to drive across the country to be at the show in Baltimore on Wednesday night. People tried to get me to skip the show to make the drive easier. I have always done what I wanted, though, even if it seemed unreasonable. I had made this challenge to myself to drive to every U2 show in the U.S. on this leg of the 360 tour, and that is exactly what I was going to do.  Thank goodness I did, because Anaheim 2 was my favorite show of the U2 360 tour.

That second night in Anaheim, U2 finally changed the set list! With every new change, I grew more and more excited! For the first and only time in the U.S., U2 started the show with five straight songs from Achtung Baby, celebrating the album’s 20th anniversary. During “Even Better Than the Real Thing” Bono said, “Southern California. Orange County. Where you gonna take us tonight? You take us higher!”, and that they did. The second song of the night was “The Fly,” which had not been played since 2006 in Hawaii. During “The Fly” Bono yelled, “Achtung Ya’ll!” just as he had during ZooTv. “The Fly” would remain in the set list for the rest of the tour. “Where the Streets Have No Name,” which is usually in the encore, was the sixth song of the night. During “Get on Your Boots” right before my favorite “LET ME IN THE SOUND,” Bono said, “Larry Mullen, do you know how beautiful you are?” Bono introduced Larry as “a movie star” saying, “it had to happen.” He went on to say, “our Lawrence plays opposite the great Donald Sutherland in The Man on the Train.” My favorite part of the night was when my favorite song, “I Still Haven’t Found What I’m Looking For”, found its way back into the set list for the first time that leg – and it remained there for the rest of the tour. Bono dedicated it to Quincy Jones, who was in the audience, and said, “This song means a great deal to us.” I cried like a baby, literally, tears streaming down my face. This was one of my favorite moments of the entire 360 tour – very special to me. “Stuck in a Moment” was played instead of “Stay,” which made me extremely happy. Bono, of course, dedicated it to Michael Hutchence, but also talked about Edge and how he would be a great neighbor (referring to the petition against Edge building a house in Malibu). Bono also mentioned that it was Edge’s wedding anniversary. The black lighted jackets made their return during “Zooropa” and “City of Blinding Lights.”

Larry smiled at me during “I’ll Go Crazy,” as he usually does since I’m the only one behind the stage in a Larry Mullen Band shirt jumping up and down screaming his name. There was only one encore at that second show in Anaheim. A sixth song from Achtung Baby, “Ultra Violet,” made its way into the set list for the first time that leg, replacing “Hold Me Thrill Me Kiss Me Kill Me.” Before “Moment of Surrender,” Bono paid tribute to Springsteen’s saxophonist Clarence Clemons, who died earlier that day, and sang a part of Bruce Springsteen’s “Jungleland” after, as he would for the rest of the tour. “Magnificent” was left out of the set list for the first and only time that leg.

The set list of my favorite show of the U2 360 tour (Anaheim2) was as follows: Even Better Than The Real Thing, The Fly, Mysterious Ways / Don’t Speak, Until the End of the World, One, Amazing Grace / Where the Streets Have No Name / All You Need Is Love, I Will Follow, Get On Your Boots / She Loves You, I Still Haven’t Found What I’m Looking For, Stuck In a Moment, Beautiful Day / Space Oddity, Elevation, Pride, Miss Sarajevo, Zooropa, City of Blinding Lights, Vertigo / It’s Only Rock and Roll, I’ll Go Crazy / Discotheque / Please, Sunday Bloody Sunday, Scarlet, Walk On / Never Walk Alone, Ultraviolet, With or Without You, Moment of Surrender / Jungleland 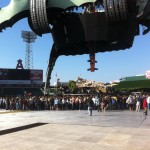 I had the best time at this show! I am SO glad I did not skip it just to get a head start on my cross country drive. Never listen to reason. Follow your passion. I left Anaheim, California on Sunday June 19th at 7:30am PST (exhausted from back to back U2 shows) and arrived in Ellicott City, Maryland Wednesday June 22nd at 11:30am EST, the morning of the Baltimore show. If I had thought logically, I would have skipped the second Anaheim show to make it an easier cross country drive, but then I would have missed my favorite show of the tour. And if I had been thinking logically, I would have never even gone on the trip to begin with because I could not afford it, but then I would have missed out on the best summer of my life On the Road with U2 on the 360 Tour.

You can watch my highlight video from that magical night in Anaheim here.

01 Even Better Than the Real Thing

04 Until the End of the World

06 Where the Streets Have no Name

09 I Still Haven’t Found What I’m Looking For

23 With or Without You