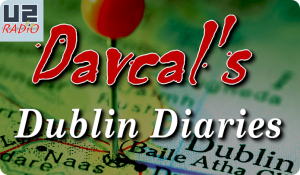 You may or may not know that Bono recently addressed the European People Party Conference (EPPC) in Dublin. By all accounts, the speech was a good one, and added a little glamour to an otherwise dull talking shop. Unfortunately, the very appearance of Bono is enough to start the abuse. A few days after his address at the EPPC – I presume because they noticed the level of hatred directed at Bono along with their own reporting of the address in question, The Irish Times posed the following question on it’s Facebook: “Is it time Ireland stopped giving Bono a hard time?” Here is one response: “We’ll stop giving him a hard time when the sanctimonious prick shuts his mouth”. This post had 152 ‘likes. There were others who chimed in in defence of Bono, which I was glad to see, but the majority of comments were similar to the eloquently expressed sentiment above!

This dislike/hatred of Bono is not new, though. Ever since U2 came to international prominence Bono, not just U2, has become something of a hate figure in Ireland. Since I’ve been a fan of U2 I have been aware of this and for a while I have been thinking about it and where it all started. So I decided to look back at my own U2 timeline to see if I can pinpoint when it became something altogether more sinister than mere dislike.

In the 80’s Ireland was a very different country to the one it is today. Ruled by the Catholic Church, with a crumbling infrastructure and chronic unemployment. (there is severe unemployment today but on the whole the country is in much better shape than it was in the 80’s) Going to college was something only the privileged could aspire to. For a whole generation the priority was to find a job, any job, and hold onto it with both hands. If you couldn’t find a job the boat and plane were your only options. Back then U2 were, mostly, liked in Ireland.  Their music was not universally liked but the fact that four young men from Dublin were making waves in America and Britain. Filling Wembley arena and Madison Square Garden was big news. U2 were our boys out there representing Ireland, putting us on the map. The feeling was one of pride (no pun intended).

U2 filled Croke Park for the first time 2 weeks before Live Aid, in 1985. I wasn’t at that concert (the last U2 concert I missed in Ireland) I wanted to be there but at 13 years old my parents decided I was too young. U2 filling Croke Park was huge news. I have a bootleg copy of the concert somewhere in the attic. I have Bono’s opening salvo etched on my mind “Well, the Jack’s are back. And what an all Ireland we have for you tonight” The ‘Jack’s’ in question are Jackeens, what Dubliners are referred to by the rest of Ireland. Dubliners are called Jackeens because they were considered the most “English” of all the Irish. The ‘Jack’ part is from the Union Jack and the ‘een’ part means small or little in Irish. The translation is ‘little english’. Dublin GAA fans are referred to as ‘the Jacks’., and the all Ireland is the final game of the year held in Croke Park for Gaelic Football and Hurling the winners of which are crowned ‘All Ireland’ Champions. So, Bono was quite cleverly reaffirming U2s ties with Dublin and Ireland. And it was reciprocated in kind. The concert was outstanding (by all accounts and judging by my old cassette tape) 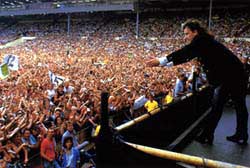 Two weeks later Live Aid happened. The immediate reaction to it in Ireland was “What happened?” Where was ‘Pride’? Where was ‘New Years day’? Why was he jumping into the crowd? Who does he think he is?? Although people were aware of U2 and how big they were becoming Live Aid was when Bono came onto the radar of the general Irish public. And they weren’t sure what to think. The following year U2 headlined Self Aid. They had toured North America with the Police on the Conspiracy of Hope Tour, but no one in Ireland had seen U2 since Live Aid. When they arrived on stage we were met with a skinny Adam Clayton, Edge still wore a hat but somehow looked more ‘rock star’, Larry still wore the denims and leather but like Edge, he seemed more self assured. The Bono emerged. The mullet had been replaced with a kind of ‘bob’ style shoulder length hair a beard and a brown velvet tassel jacket!! WHO WAS THIS GOD??? That night U2 left no one in doubt they were headed for the stars.

The next time I saw U2 was when Bono and Larry were interviewed on a TV show called ‘TV gaga’. Edge and Adam joined them for a couple of songs  called ‘Womanfish’ and ‘Trip Through Your Wires’? What the hell was this?? What happened to the U2 of Sunday Bloody Sunday and Pride?? But off they went again, pretty much unnoticed and uncommitted upon by anyone other than other music fans that thought they had shot their bolt and U2 fans that feared the same. 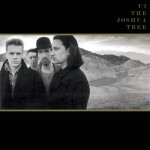 I don’t know the exact date, but must have been around mid February 1987 when Dave Fanning started to play songs from the new U2 album which was to be called ‘The Joshua Tree’ or was it the Jericho tree? Was it ‘tree’ or ‘Three’? I also don’t remember what he played first but everything he played was incredible. Bullet the Blue Sky, in particular, was a song I listened to countless times after managing to record it without Dave Fanning butting in. When the album was released and went to no.1 all over the world U2 filled the headlines in Irish newspapers and TV. Ireland had genuine, real life, superstars!! And Ireland didn’t like it.

However two sell out concerts in Croke Park and one In Parc Ui Chaoimh in Cork, U2 could have sold out many more, confirmed U2’s place among the Irish music going public’s affection. A few weeks later the main evening news aired footage of U2’s sell out Wembley Stadium concert. U2 were conquering the world. But the Irish begrudgery was building. Later that year On ‘the Late Late Show’ an audience member took to castigating the band for having ‘dirty’ fans. Another indignantly asked why, with all their money, they would not come and live in Ireland and pay their taxes here??!! (yep, it goes back that far) Still, though the overwhelming feeling was one of pride at what they had achieved. 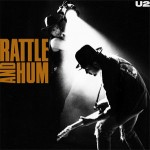 Then came Rattle & Hum. The world Premier in the Savoy, O’Connell St, Dublin. I got myself a great spot up a tree. The Limo’s came around the corner and the thousand that were there went wild. U2, biggest band in the world, best band in the world with their very own cinema release. It was all too much for some. The negative reviews came out, but the reviews ignored the music and concentrated on the band being ‘pompous’ and ‘trying to ingratiate themselves to America’. Some people began to speak more often and openly of Bono and their ‘hatred’ of him. The reviews had made it okay , after 10 years of hearing ‘how great u2 are’ finally they could say how they ‘really’ felt about that wanker, Bono. No one seemed to get the humour that I knew was there, I thought they were just getting better and better.  But even then I was confused by the hatred. This backlash was obviously felt by the band too when Bono announced at the Point Depot during one of the final Love Town Tour shows that U2 needed to go away and “Dream it all up again” For some this was great news, it meant the end of U2.

But U2 would come back better, bigger and more pompous that any hater could ever imagine.