As I write this, the Grammys will be airing in just a few hours. Despite all of our hopes, it seems pretty clear by this point that U2 will not be performing this year.

That’s OK – we all want Bono to be well rested and healed when May comes around so that those Innocence and Experience tour dates go as well as possible. U2 are up for one Grammy this year, the award for best rock album, and while I obviously don’t know at this point whether or not they’re going to win, I think that they’ve got a good chance. Whether or not they win tonight, one thing that the band has a reputation for is great acceptance speeches. Everybody already knows that Bono is a great speaker in his own right, but Edge, Adam, and Larry have all given their fair share of appreciable speeches over the years too. 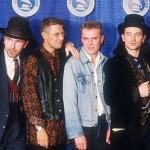 I think that when it comes to Edge, my personal favorite acceptance speech that he’s ever given came from the 1988 Grammy awards when they received the trophy for Best Rock Duo or Group. Edge read from a long list of people the band thought they thought they should thank. Some of the names were those you’d expect, like the good folks at Principle Management, Island Records, and Amnesty International. Other names, though, were a little unexpected though, as Edge read off names like Walt Disney, James T Kirk, and “Sumo Wrestlers throughout the world.” 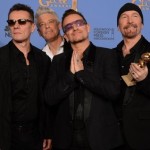 Larry is responsible for the most recent speech on today’s list, for the passion he showed at 2014’s Golden Globes. Larry’s so quiet that it’s easy to forget sometimes that he’s just as fervent as the other guys in the band when it comes to certain topics, and he makes it clear here that discussing his homeland “Holy Catholic Ireland” is one of those topics. It’s good to see Larry speak out about something he feels strongly about.

My favorite acceptance speech from Adam over the years makes the list because I identify so strongly with it. In fact, watching the video today made me tear up just as much as it did ten years ago when Adam first spoke these words. “30 years ago, I got my first bass guitar, or as I thought, a guitar with only four strings. I had no idea what bass was… I just knew I had a weapon, and a shield to take on the world. When we all got together in Larry’s kitchen, we didn’t know about the great traditions of American music. We didn’t know the blues, or soul, or R&B, or country. But we did know that together, we had the chance to change the world by making a noise. This was punk, and it saved my ass.” Music has done pretty much the same for me over the years, and although I’ll never be a member of an award-winning rock and roll band, I’m still grateful for the shield that it provided me when I needed it most.