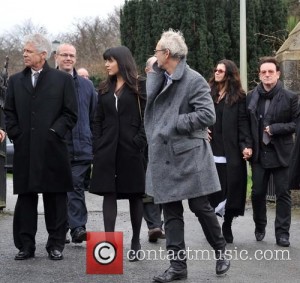 U2 joined around 100 mourners at the funeral of their ‘travelling pastor’ Jack Heaslip, who passed away at the weekend.

The group’s frontman Bono was accompanied by his wife Ali Hewson to the service at St Mary’s Church, Howth yesterday afternoon as they paid their respects to their friend.

The 71-year-old clergyman passed away at his home over the weekend after a prolonged battle with motor neurone disease.

Their relationship with the pastor dates back to the 1970s, when he worked as a guidance counsellor in Mount Temple Secondary School which they all attended.

When the band was on tour he helped the hundreds of staff and crew members – who were away from homes and families – cope with the challenges of isolation and long-distance travel.

Presiding over the service, Rev Kevin Brew described how Rev Heaslip would not have wanted the funeral to focus on himself.

“Jack made a lasting impression on so many people in so many ways. Jack being Jack, he would have had certain views on how his funeral to be conducted. Read More–>