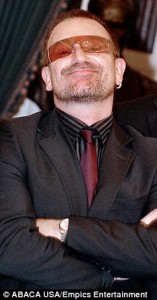 Do you really care what Iggy Pop has to say about Songs of Innocence? No? How about Nick Mason of Pink Floyd? Me neither. So let’s take a cue from this girl, who once said that she would “wait in line” to meet Bono and also called him “culturally relevant” – so mission accomplished, guys! – and shake it off this week, shall we? If you care about the fact that the balance of power in Congress has shifted, you may find these tidbits about Bono’s politics interesting. If you think that his do-gooderism means he must be politically liberal, you may find them surprising – but you shouldn’t because remember, he doesn’t believe in painted roses or bleeding hearts.

Am I calling Bono a conservative? Maybe I am, and maybe I AM. Here’s why – and no, I’m not going to point to his work with George W. Bush. That was Bono being a gracious diplomat and brilliant social activist. Now, has he said that George W. Bush doesn’t get enough credit for the incredible strides made in humanitarian aid from the West to the third world, including HIV treatment, clean water initiatives and malaria prevention in Africa? Um, yes. But he also praised Bill Clinton’s efforts for the cause. So no, I’m not just pointing to that.

What I am pointing to is evidence like this talk he gave to the Conservative Party Conference in the UK in 2009, which reportedly pissed off quite a few Labour Party supporters on Twitter who created the innovative hashtag #BonoToryScum.

More recently, there’s the 2012 Georgetown University speech that caused waves in the conservative talk radio universe upon their discovery of it nearly a year later (better late than never). As a longtime fixture on the conservative talk scene, I can report unequivocally that this speech inspired hordes of conservative media figures to hold a new respect for Bono. The line from the speech that gets the most replay in conservative outlets is, “Aid is just a stop-gap. Commerce [and] entrepreneurial capitalism takes more people out of poverty than aid,” followed by,  “In dealing with poverty here and around the world, welfare and foreign aid are a Band-Aid. Free enterprise is a cure…Entrepreneurship is the most sure way of development.” 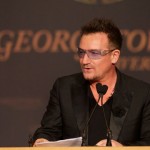 Do you think Bono is conservative? Do you care? Let me know in the comments.