I’ve written a lot in the past about some of U2’s more obscure gems, deep album tracks like “Running to Stand Still” or “Electric Co.”, but today I want to celebrate one of U2’s best-known songs, “Vertigo”, from 2004’s How to Dismantle an Atomic Bomb (HTDAAB) album. “Vertigo” is, in my experience, one of those tracks that even folks who aren’t U2 fans tend to enjoy, and it’s not hard to understand why. When I think back to the first time I ever heard the song, driving home from work almost a decade ago (a decade?!?! how did that happen?) I was immediately struck with the balancing act which the song performs, acting as the perfect bridge between U2’s dense but sometimes inaccessible maze of depth and intellectualism, and a perfect, bite-sized chip off the old rock n’ roll block, with a towering, hummable guitar riff and enough hooks to hang a whole career’s worth of platinum plaques. Bono gave a description of the song that’s hard to beat at the 2006 Grammy awards, when he called it “a song…that makes you want to burn your house to the ground.” 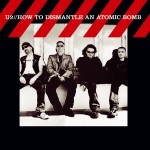 Much has been said about the unorthodox counting that Bono starts the song with – “Uno! Dos! Tres! Catorce!”. I tend to favor the idea set forth by Bruce Springsteen during his induction speech for the band at the American Rock & Roll Hall of Fame, when he discussed the idea that 1,2,3,14, (which is the English translation of Bono’s Spanish counting) “is the correct math for a rock and roll band” where “the whole had better equal much more than the sum of its parts, or else you’re just rubbing two sticks together, in search of a fire.” Bono’s dismissed the seeming mathematical irregularity as an alcohol fueled faux pas, but you and I both know that nothing makes it onto a U2 record by accident. I read a theory recently that I’d like to share with you – this is on the song’s wiki page, so you may already be familiar with it. What if 1,2,3,14 refers to the Bible? One, meaning the first, or Old, testament; two for the second book of that testament, which is Exodus. Three for the third chapter of that book, and 14 signifying the verse. Exodus 3:14, which reads “And God said unto Moses, I Am That I Am: and he said, Thus shalt thou say unto the children of Israel, I Am hath sent me unto you.”. This wouldn’t be the first time Bono’s used shorthand to refer to Biblical verses – see the cover of the band’s preceding album All That You Can’t Leave Behind – nor would it be the last time – see the lyrics to “Unknown Caller” for one, or an interview from (I think) 2008, wherein Bono discusses the possibility of making a whole album of songs with numeric references. Further credence is lent to this theory when one considers that just as this possible reference to a name for the Christian God opens the album, so does the song “Yahweh” a much more overt reference to the same being, appear as the closing track on standard versions of the release. Only the band know for sure, I imagine, but It’s an interesting theory, and one that’s hard to discount.

“Vertigo” appeared at every show of the tour that borrowed its name, sometimes appearing as both the first and last songs performed at individual gigs. My personal favorite performances were those that included snippets to “Stories For Boys”, a song from U2’s first record, Boy, to which a lyrical reference is made in the chorus of “Vertigo”. “Vertigo” also appeared, as did its album-mate “City of Blinding Lights” at every show of the 360 tour, and I strongly suspect, knowing the band’s preference for upbeat songs, that the band will continue to play this song for as long as they tour.