Since Apple is on the mind of every U2 fan this week, this is the perfect time to address Bono’s thoughts on the brand with a few quotes. Interestingly, the first Google result for the search term “Apple Red” is not a red apple. Indeed, it’s the page that the Apple brand has devoted to the (Red) product line. So Apple and Bono go way back – as most of us know, as far back as 2004 with the U2 edition of the 4th Generation iPod Classic. Speaking of which, is anyone sorry they spent $349 on it? I know I’m not sorry that I didn’t, because if I really wanted one now, I could find it on Craigslist for 50 bucks.

Back to things Bono has said about Apple. In June, Bono and Apple Senior VP of Design Jony Ive appeared together for a Cannes Lions presentation, the tie between them being that Ive had previously helped our guy raise some cash with an auction for Red. During this talk, Bono told the audience a story involving the controlling tendencies of the late Mr. Jobs, and his displeasure for Apple’s “modesty run amok” when it comes to the brand’s history of supporting Red. It included such gems as:

I love moments like this, when Bono is a bit of a loose cannon. It’s fun to watch when there’s not much else going on in U2 land. 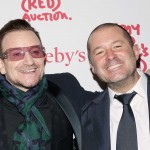 To be fair, Bono admitted that Jobs was “a kind of co-creator” for Red in its early stages. He also told a story about Jobs in that delightfully nasal American accent he pulls out from time to time, in which he talked about pleading with Jobs to use the fully branded (Red) logo on Apple’s Red products. Apparently, this plea was emailed – which begs the question, what do you suppose Bono’s email address is? I’m guessing he’s more of a [email protected] than a [email protected] Just for fun, here are some other possibilities:

Let’s not kid ourselves. No matter what he says about the Apple cult, we all know Bono’s email has to be @mac.com.