Today I want to talk about a few of my favorite official U2 remixes. I do so as part of a series of articles titled “Covering U2” despite the fact that remixes are not and never shall be the same thing as covers. In this sense, the term “covering” refers to the second definition provided by Google, which states “deal(ing) with (a subject) by describing or analyzing its most important aspects or events.”, with a particular focus in this case on remixes, OK? 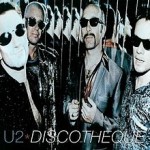 I’ve always believed that the very best remixes preserve the best elements of the original but present them in a wholly and completely new way. One such remix is the “Howie B, Hairy B” remix of Eve Hewson’s favorite U2 song, “Discotheque”. Although it’s labelled as a remix, this could almost qualify as a completely new song, or at least a sequel to the album version. This version of the song steals a few lyrics, along with the funky techno-rock sneer, from the original, and then takes them in an entirely new direction, adding an original coda that finds Bono mired deep in cellar-dweller mode, spitting out his faux-rap lyrics in a rasp that falls somewhere between blues singer and homeless guy. The great thing about this song is that it has as much in common with “Bad” and “Running to Stand Still”, thematically, as it does stylistically with the original “Discotheque”. The new lyrics in this version are all about things that people become slaves to. Rhyming “chocolate” with “apocalypse” might seem strange to some, but somehow it really works in the context of the song. An utterly, completely great remix.

I confess that the second one on this list isn’t included so much for its greatness as it is for the sentimental value it holds for me. Back in the day, when I was first introduced to U2 by Randy Halprin at boarding school, one of the very first U2 things I owned was a cassette single for “Mysterious Ways” which was given to me by Randy. The cassette only included two songs – the original version of the title track, and the “Solar Plexus Magic Hour” remix, which was an amalgamation of two separate remixes which were released on the CD version of the release, those being the “Magic Hour” remix from Apollo 440, and the “Solar Plexus” version from Howard and Trevor Gray. My barely pubescent roommates and I would pogo around the room like …well, like teenagers,  to the aggressive dance beat, especially at the point when the song transitioned from the mellow ambiance of the Magic Hour section to the punch-in-the-gut Solar Plexus portion. What was even cooler was when, as an adult, I discovered that the “Solar Plexus Magic Hour” remix was (at that time) unreleased on CD. That meant that by holding onto that cassette, I had something that was a little smidgen bit of a rarity. It made me feel special when I was younger, anyway, before I went searching for an original vinyl copy of Three and I discovered what rare really was. I still enjoy this strange Frankenstein version of the song occasionally, although I blush nowadays to remember how simple I was as a kid. Back then, all of the deeper meanings in the song’s lyrics were completely lost on us, as were the subtleties in the musical performance on the original. All we knew was that the remix rocked, and we loved it. I suppose that that feeling is the same thing that the guys are seeking to capture with the new album. I wish them all the luck in the world with that, but I hope that when the inevitable glut of remixes emerges as B-sides, they remember to include some more daring, esoteric stuff, too, for us older fans.