I know that a lot of you are probably groaning to yourselves after reading the title up there “The Fly?!? Oh, man! I hate that stupid song!” while just as many of you (I’m looking at you here, Joe) are jumping up and down with joy. My first experience with the song came right after Christmas break, 1991, when my room-mate at boarding school, the guy who introduced me to U2, returned bearing some new tune-age. He was telling me about how much of a departure from their previous sound the record represented as he put the disc into his CD player, and he made particular note of one song that sounded “Satanic”. I think about that comment a lot, and the only thing I can imagine that he might have meant was “The Fly”, with it’s abrasive guitar sound that might have made him think of black death metal. I know, it’s a stretch, right? I can’t come up 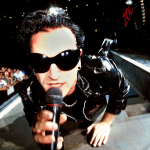 with anything else, though, and it is indicative of the big change that resulted from U2 “dreaming it all up again”. While not “Satanic”, per se, “The Fly” is…well, it’s different. It’s modern sounding – some might even say “post-modern”. It is a rockin’ song, but it’s also a little weird, with those falsetto vocals on the chorus and that wild organ. As an adult with a lot more musical knowledge under my belt, it’s a lot easier to label the song as “industrial”, rather than “heavy metal”. Musically, it’s not so much dense, which I find to be a hallmark of a lot of metal music, as it is abrasive. That’s what the band were going for though, I think. It’s a wake-up call for their audience as much as it was for the band members themselves. It’s a call to arms, intellectually. It’s a notice that whatever safety or comfort there might have been in the band’s music before has been stripped away and replaced by this sharp slap in the face. The band weren’t going to make their message so obvious anymore. Listeners needed to pay attention. They needed to think. This isn’t pop music, this is rock ‘n’ roll, and it’s anything but safe. 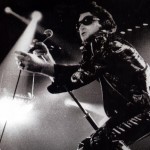 Lyrically, the song is, in many ways, a great example of everything that the ZooTV tour was all about. There’s wisdom in those lyrics, but there’s BS as well, and nobody’s telling which is which. The line in the chorus about love, shining “like a burning star, falling from the sky” used to make me think of pretty little specks of light twinkling romantically in the night sky, but then one night – about 15 years ago, I think – I was thinking about how stars are really nothing like the nursery rhyme fodder that they appear to be from here. Stars are violent. Stars are dangerous balls of burning gas hurtling through space, and I love that mental image, as it contrasts with the sweetness of the falsetto voice that’s singing it. It’s a great subversion, and it’s all about (like much of Achtung Baby) a romance in ruins.

Of course, we can’t talk about “The Fly”, the song, without talking about “The Fly”, the character. Played by Bono, the character appears in the song’s music video as well as all of the song’s live performances from the ZooTV tour. The character represents a kind of rock star jackass, full of his own wisdom. It’s tempting to blow him off entirely, but if you’re paying close attention, you can learn a lot from him. What not to do, if nothing else, but there’s a nugget of wisdom, of beauty, in there too. He didn’t become the big mega-star that he is by accident, after all, and there remains a reminder of who he used to be that got him to where he is in the first place that’s still worthwhile. I think that the character of The Fly provided Bono with a little bit of an escape, an opportunity to enjoy a little bit of the excess that he was so afraid of without getting lost in it. It was also a chance to be the good guy that he really wanted to be without hanging himself out there on the cross of earnestness that had made the end of the previous decade so unbearable. 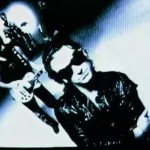 “The Fly” appeared at every show of the ZooTV tour, and then was packed away for Pop*Mart, seemingly never to be heard from again, belonging to the Zoo era and everything that made that tour what it was. Surprisingly, (and awesomely) “The Fly” was resurrected for the Elevation tour, and hasn’t been forgotten since. I’ll never forget, one night back in early 2001, before the Elevation tour had started, some fans were online, chatting in one of the internet’s many forums – maybe Interference, or one of the others. It was so long ago now, and so many have come and gone, it’s hard to keep straight – but anyway, a guest user logged in and out of the blue asked if anyone thought that “The Fly” would appear on the upcoming tour. The consensus was that it would not, and the reason given was mostly what I described above – the song was too entwined with the Zoo tour to ever appear again. That scene was in the past, and the band – always desiring to move forward – would have no desire to revisit it. After this conversation, the guest user who had asked the question left, and we went on to talk about our favorite pair of Fly glasses or something else equally mundane. I have no proof, of course, and I doubt that I’ll ever know for sure, but I’ve always wondered whether or not that guest user was a member of the band, feeling out fans while working out set-lists. Whatever the case, I’d be surprised if, even now, we’ve seen the last of “The Fly”.