One of U2‘s most rockin’ songs is their single from the 1995 film Batman Forever, “Hold Me, Thrill Me, Kiss Me, Kill Me.” The song’s title first appeared, in an obscured fashion, on the cover to their 1993 album Zooropa, and in many ways could serve to explain the ways in which Achtung Baby, it’s sibling album Zooropa, and their supporting tour ZooTV were all a reaction to the band’s earlier work and the critical responses to that work. I won’t bore you with the story about how and why the band “went away to dream it all up again” at the end of the 1980’s, but if you’re not familiar with events, listening to the lyrics of this 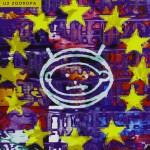 song should give you a quick idea of the band’s mindset. Because the title appeared on the cover of Zooropa, we can assume that the song existed at least two years before it was released, but it’s not hard to understand why the band chose to not include it on Zooropa, which was an effort by the band to shy away from “pop rock” (IE non-experimental music) and “Hold Me, Thrill Me…” has a big, fun guitar riff that was sure to propel it up the charts. The song just didn’t fit in with the theme of the album, but when it was released, it proved to be one of the band’s most successful singles from the 1990’s, peaking at #16 in the US, and at #2 in the UK, eventually being included on the band’s Best of 1990-2000 compilation.

“Hold Me, Thrill Me…” made its live debut at the first show of the Pop*Mart tour and served as kind of a “where are they now” for ZooTV’s Mr. MacPhisto. Although Bono didn’t don the familiar face paint and gold lame suit for the song’s performances, he would often pretend to suffer from a coughing fit at the start of the song, as through the song’s singer was pulling himself out of mothballs just for that night, miming devil’s horns with his fingers to further clue the audience in, and MacPhisto did make appearances on the big screen while the band performed. An example of this performance can be found on the Pop*Mart Tour’s Live from Mexico DVD. 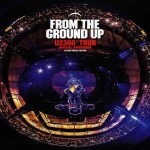 After the Pop*Mart tour ended in 1998, “Hold Me, Thrill Me…” wasn’t performed live again until the third leg of the 360 tour, where it was played interchangeably with “Ultra Violet” in the remainder of that tour’s encores. One of these live performances saw release on the 2012 fan club release From the Ground Up, and the way the audience erupts into cheers as U2 launches into the song proves that “Hold Me, Thrill Me…” still has an audience. If “Invisible” is any indication, along with comments from the band members, I’m looking for the next record and tour to be upbeat and loud, and I would be surprised if that proves to be the case and “Hold Me Thrill Me…” doesn’t show up on the tour.