Zooropa occupies a strange place in U2’s discography, somehow managing to simultaneously be the most and least accessible album they’re recorded. I say the least accessible because its got some of the most adventurous, sonically experimental music that U2 has put out, with songs like “Lemon”, “Numb”, and “Daddy’s Gonna Pay For Your Crashed Car” three songs that, although I love them dearly, I have to admit are just plain weird. That’s OK, weird isn’t bad at all. I’m pretty weird myself, in fact, and damn proud to be so. But then, there’s the other side of Zooropa’s bi-polar personality, with perfect little pop masterpieces like “Babyface”, “Some Days are Better Than Others”, and “Stay (Faraway So Close”, the latter of which is kind of a contradiction in and of itself, which seems appropriate, seeing as it’s come to be kind of the ambassador in U2’s set-lists over the years for the album it represents. 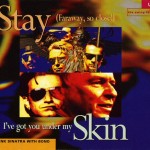 For a long time, Stay was the only song from Zooropa to ever be played in the USA, but before that, the song made its live debut during the fourth leg of the ZooTV tour, less than a month after it’s initial release to the world, then went on to appear at almost every show for the rest of the tour. I’ve always felt that the thing that makes “Stay” so special is the way it traps the listener. The mood set by the song is kind of contemplative at the start, as the somewhat muted instrumentation draws the listener in, before closing the door behind them as the rhythm picks up, locking you in with this pervasive enveloping sound. I’ve always likened it to being held close in a comforting, musical womb, where all my needs are provided for, and all I need to do is just take it in. The problem with the early live performances, which were arranged to be as close to the studio arrangement as was possible in a live setting, is that loses the intimacy that makes it so wonderful, becoming a kind of middle-of-the-road pop ballad. By nature of the large, open spaces in which these Zoo shows were held, the sound became somewhat diluted, the spell that it cast over the audience weakened by the nature of stadium concerts. Still, it was the Zooropa song that translated itself best to the live arena at this stage, and the band strongly desired to incorporate music from their latest album into their concerts, so it was a nice novelty for both performers and audiences.

“Stay” skipped the Pop*Mart tour altogether, but was resurrected for the first leg of the Elevation tour, in April of 2001, making it’s US debut in San Jose, California. These performances, part of the acoustic sets that Bono and Edge regularly performed from the opposite end of the “heart” stage, were more subdued and melancholy than the ZooTV arrangement, and, although the song wasn’t performed at every show, it was always warmly received by audiences every time it was played. I’ve always felt that these quieter, more intimate, acoustic performances better captured the spirit of the original song, and were a true spiritual high point of every show at which the song was played. “Stay” missed the entirety of the Vertigo tour, but was resurrected once again for the most recent 360 tour that began in 2009, in an acoustic arrangement that echoed the Elevation arrangements.

I think that one thing the band learned from the 360 tour is that their audience loves to hear the occasional rarity, and with the particular success that “Zooropa’s” revival brought with it, as well as the number of votes that “Stay” received in the U22 voting, I would be surprised if “Stay” doesn’t become a fixture in future live shows by the band.