Who’s Gonna Ride Your Wild Horses is one of the most debated songs in all of U2’s vast catalog. Even the members of the band itself seem to not be sure how to feel about it. I’ve read interviews in which Bono claimed that he felt that they “didn’t quite nail the song” and another in which Adam stated that he didn’t think they’ve ever done the song justice live. That may be why it’s history of live performances is so spotty – it was one of the first Achtung Baby songs dropped from the setlist on the ZooTV tour, after which it made sporadic appearances in an acoustic arrangement. It was revived years later for the Vertigo tour in the full band style before reverting again to an acoustic performance.

Like much of the album it’s from, the song made it’s live debut in Lakeland, Florida on February 29, 1992. This performance happens to be one of my personal favorites, at least at the beginning. It starts with a sharp jab of 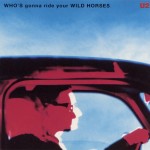 guitar from Edge against a synthesized string section, before the guitar drops out as Bono begins to sing the first verse. The first verse is mostly just vocals and strings, with Larry keeping time on a tambourine and Edge providing occasional bursts of guitar. After the first “sha-la-la”, those heartbeat drums kick in, and the song moves into high gear, conveying some extremely powerful emotions. From here on, the song sticks pretty close to the album arrangement until the end, where Edge contributes an extended guitar solo. The whole performance clocks in at over 6 minutes, and I have to admit that it does start to get a little tiring toward the end. The main power of the song is in the visceral heartache of the verses against that stark guitar/strings combo and the desperate yearning in Larry’s drums. It’s always made me imagine a person standing on an ocean cliff, the sea crashing against the rocks below as a storm rages above. As the lightning flashes intermittently (signified by Edge’s guitar) the past that led him to this point plays like a movie in his mind as he considers his options. As the drums roll in, representing defiance and inner strength, he takes a stand against fate, nature, and the gods themselves. That’s where the spell is broken. When the song transitions to the chorus, and becomes a more standard pop-rock song, it loses some of it’s impact, and, as I said, wears a little thin by the end. I find that to be true whether we’re talking about the album version, or this particular live arrangement.

All performances of this song for the next few months, through the first two legs of the ZooTV tour, in fact, stick fairly close to this arrangement, the only real difference being that Edge’s guitar seems to remain a more constant presence throughout the first verse, which, to me, diminishes the power of the first part of the song. Additionally, around the start of the second leg of the tour, the extended guitar solo at the end of the song was curtailed, shaving 45 seconds to a minute off of the complete performance time, depending on the night. This change does seem to make the song slightly more palatable, but it still seems to run out of juice well before the end. The last performance on the Zoo tour with this arrangement came on August 12, 1992, in New Jersey. Following this show, the band decided to drop Who’s Gonna Ride from the setlist, and it made only 4 more appearances during the next 16 months that the ZooTV tour lasted, all of which were shortened, acoustic arrangements. featuring just Bono and Edge. This arrangement premiered in October of 1992, at a show in Tempe, Arizona, and I have to admit that the song worked reasonably well as a stripped-back sing-along. The emotional impact of the verses isn’t as striking without the drums, but neither does the song drone on forever until it’s power is diminished entirely.

Following the fourth of these acoustic performances, the song was mostly forgotten for several years, although it was snippeted in a handful of performances of Bad and All I Want is You during the Elevation Tour of 2001. My personal favorite of these came at the beginning of All I Want is You, in July, during a show in Switzerland, wherein it took on a more resigned and mournful quality thanks to some minor changes in the melody.

At the end of the Elevation Tour, I assumed that, like the whole of the Pop album, Who’s Gonna Ride was henceforth consigned to “snippet hell”, never again to receive a “real” performance. In 2005, though, at the May 28 show of the Vertigo tour in Boston, Who’s Gonna Ride was revived in all it’s rockin’ glory, with a full-band performance which was once again modeled after the album version. Unlike the ZooTV arrangement, though, this arrangement was lacking the strings at the beginning and  seemed to be played at a slightly faster tempo, making it feel more muscular and less drowsy toward the end. Even so, this full band arrangement didn’t last long, receiving only 5 airings before the band resorted once more to playing the song in an acoustic fashion, starting in Chicago in September of 2005. This time, the acoustic performance involved the whole band, retaining the drums and bass of the earlier performances. In my opinion, this was the worst arrangement this song has had. Without the momentum of the electric guitar, the acoustic arrangement with drums just felt clunky. Fans do seem to respond well to this song, however, (and, really, it does have a great, hooky chorus) so the band gave it a good effort, playing the song 9 more times during 2005 before abandoning it entirely. The song was given one more try, at the very last show of the Vertigo Tour in December of 2006, in what is my absolute favorite arrangement. Similar to the acoustic job the song was given the year before, but with a sprinkling of keys from fan Michael Mitchell. To my ears, this was probably the first time the song was played in a manner which kept the power of the earlier, album-based arrangement, but also kept the sing-along momentum of the later acoustic versions.

With a tour looming (hopefully) in the not-too distant future, it’s anyone’s guess what songs or arrangements the boys might try this time out, but if I had to guess, I don’t expect Who’s Gonna Ride to ever become a setlist regular again. That’s OK. I want to hear the new songs, and those old shows aren’t going anywhere. We can relive the past at any time, I’m more interested in the future.