During the “Zooropa” section in the U2 360 live set, the stage got cloaked in shimmering lights like a Christmas tree, obscuring the band, blurring the land where technology-meets-humanity that the song invokes. A rugged tapeloop litters the mind with “WTF” random blips of spoken media babble.

In the book U2 by U2, Bono reflects that Zooropa was “our attempt to create a world rather than just songs, and it’s a beautiful world. The opening was our new manifesto: I have not compass, I have no maps, and I have no reason to go back. . . . The opening was the audio equivalent of Blade Runner’s visuals. If you closed your eyes you could see the neon, the giant LED screens advertising all manner of ephmera.” 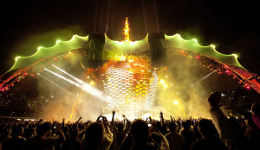 Something got hidden away in the starry starburst of rising young rockstars. God gets lost in man chasing mammon. God gets lost from man. Like God hiding from Moses in the rocks, this is rock that hides God only to reveal God. Bono recalls, “I wanted to get away from the weight of where I was going. I wanted to fly. . . . And I have no religion, I don’t know what’s what. There is a line in the New Testament [John 3:8] which says that the spirit moves and no one knows where it comes from or where it is going. It’s like a wind. I have always felt that about my faith. Religion is often the enemy of God because it denies the spontaneity of the spirit and almost anarchistic nature of the spirit.”

At its dirty Christmas core, the Christ story is an anarchic breaking through. The veil of colored lights get lifted, and we get lifeblood. The dirty story of Christmas finds this unmarried teenager and faithful fiancé finding the unfound, unfettered scandalous incarnation of a baby king.

The “Zooropa” narrative of human-techno hybrids in hope and fear throws back a couple of millennia to the divine-human dangerous idea of messianic and revolutionary Jesus. Bono sings, “Let’s go to the overground/Get your head out of the mud baby/Put flowers in the mud baby/Overground.”

Referencing Hebrews 10:20, Bell suggests the Christ even ripped open history and lifted the veil. Bell proclaims, “[T]his ripping was a picture of how, because of Jesus, we can have new, direct access to God. […T]he curtain ripping also means that God comes out, that God is no longer confined to the temple as God was previously. God, of course, was never confined by a building. The point of the story is that our understanding of God was.”

Perhaps Bell and Bono of the post-Zoo period are onto the same thing: ripping away the veils between secular and sacred dualities, human and divine dichotomies. When the veil of red lights lifted from the 360-stage to reveal the band again, the new setting set fires in souls.

Massive popular culture spirituality runs the risk of all kinds of sacrilege. Bell warns us of that muddy random mess where everything is “common, average, ordinary, and mundane.” At its best, rock music reconciles the wretched and the wicked with the wondrous otherworldly message of hope. Bell asserts, “This is why the Jesus story is so massive, progressive, and forward looking in human history.”

The 360 tour transformed football stadiums and entire downtown areas into sacred spaces. Headphone downloads and YouTube videos are transformative transmissions. There’s risk in all of it, but the risky for the anarchic holy spirit begun with Zooropa continues today and will hopefully smash more paradigms with the forthcoming record.

Then the rock show, whether in stadiums or back to arenas, can be again, like Bell writes, a place to say: “You are on holy ground wherever you are, and Jesus comes to let us know that the whole world is a temple because we’re temples, all of life is spiritual, all space sacred, all ground holy.” Even stables of the first century, even stadiums of the 21st century. –Andrew William Smith, Editor

Latest posts by Admin (see all)