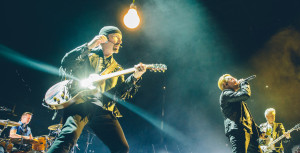 U2 are expected to announce their new Paris dates shortly in a move that would see them close their world tour in France in a symbolic gesture.

The band had to pull the plug on their November 14 and 15 Paris gigs in the wake of the terror attacks.

Now Bono, Larry Mullen, Adam Clayton and the Edge are expected to re-schedule the two gigs at the AccorHotels Arena for shortly after their Irish concerts.

A statement on U2’s official website about the Innocence and Experience tour said that a “show report is coming soon” – and the Paris venue has two free slots in early December.

U2’s RTE pal Dave Fanning has said that he imagined that the dates will be rescheduled for sooner rather than later.

He also said the symbolic gesture would be a “lovely tribute” to the people of Paris. “It’s all speculation, but I think it would be great. And I would be up for it. I don’t know if it’s going to happen but it’s a lovely idea,” he said.

However, he added that the decision was in the hands of the security forces.

“It’s absolutely nothing to do with them [U2]. It’s up to the police and the Government. U2 are so far down on the list of concerns at the moment with everything else that’s going on,” he said.