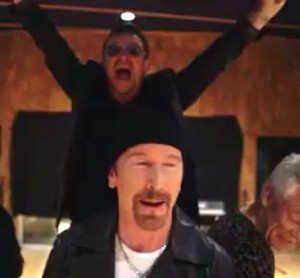 Aw, Edge. It’s not often that we’re treated to your subtle brand of zen Presbyterian humor. But we were this week on #U2NoFilter, the Facebook Q&A session where the guys took a few questions from us fans while sitting in a square formation in a brightly lit penthouse somewhere in the world. I loved it, of course – but if any of us were to show our non-U2 friends this fun video chat, they would probably reference it as a case in point for how pretentious, self-absorbed and generally annoying they believe U2 is. For one thing, the guys answered all of six questions out of the tens of thousands that were submitted. Sure, that’s annoying for us – but for someone who already hates U2, that registers at 10,000 degrees on the pretension meter. And while we find it endearing that Edge is still referring to U2’s early days as “street gang” and we swoon over Bono goofily photobombing his friend in multiple poses, U2 haters roll their eyes and pronounce that this confirms their disdain for U2 all the more. Maybe, just maybe, Bono can win them over with his Dublinian (that’s a word, right?) charm while expressing his regret for how the album release and Apple deal were received.

“Oops. Um, I’m sorry about that.” Your friend will love this part. In fact, all of media loves this part because it gives them an easy headline. How many “Bono Apologizes” headlines have you seen this week? I’ve seen dozens.

“I had this beautiful idea, might have gotten carried away with ourselves. Artists are prone to that kind of thing.” Uh-oh…he’s closing in on being a little too Bono here.

“Drop of megalomania, touch of generosity, dash of self-promotion…” Abort! Abort! Way too much Bonoism in this quote. Yikes.

“…And deep fear that these songs that we poured our life into for the last few years mightn’t be heard. There’s a lot of noise out there; I guess we got a little noisy ourselves to get through it.” You love this, I love this…but your non-U2 friend does not love this.

Here, Bono is admitting that he knows U2 was not previously on the minds of every iTunes user prior to September 9 and saying, in a way, that the arrangement with Apple was the only way to ensure U2 would gain any new listeners with Songs of Innocence – or, even retain old ones. The “fans” (I use that term very loosely) who dropped off and never bought NLOTH, then stood there like big dummies at whatever 360 Tour show they went to because they didn’t know “Breathe,” “Magnificent” or “Moment of Surrender” were sure to stay away from anything else U2 put out in the future – and so, the band was forced to do something innovative to get them back. For us, it worked out just great because we never left them in the first place. But for the delicate sensibilities of the easily offended – the people who honestly think some guy at a show in Scotland shouted to Bono, “Then stop clapping your hands!”- there’s no excuse in the world good enough for the terrible, horrible, no good, very bad thing U2 did. There’s no winning them over, and hopefully Bono realizes that – so he can stop apologizing, and start focusing on putting together a tour that true fans will enjoy.