“Bullet the Blue Sky” is one of those songs that I always like to think of as belonging to U2-fandom. There are some songs, like “Beautiful Day”, “One”, or “With or Without You”, that are universally acclaimed and beloved, even by those who don’t know much about the band. In fact, I suspect that there are a lot of people who know the above mentioned songs without even being aware that they’re by U2. Then there are those gems, the deep album cuts, that have never really gotten the attention they deserve. In many cases, and I think that “Bullet…” is one of these, they’re superior to some of U2’s more well known songs, but, even though they weren’t released as singles and remain relatively unknown by the masses at large, they are cherished by those of us in the U2 fan community whose familiarity with the band runs a little deeper. 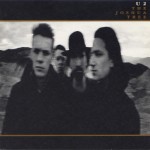 Of course, “Bullet the Blue Sky” was originally written for and released on the band’s first mega-hit record, The Joshua Tree. The guitar part in the song is famous as being the result of Bono’s request that Edge “put the war through the amplifier.”, and it’s a beast of a guitar performance, no doubt, but I always think of the song as one of those that’s really all about the rhythm section. I remember the first time I ever heard it, I was listening on headphones, and the drum part that opens the song really fascinated me. If you listen closely, which I was, you can actually hear the air whistling around Larry’s sticks as he brings them down to crash against the drum. It’s an immediate notice that this song is hard and heavy, lyrically, emotionally, and musically. The stability provided by Adam and Larry allow the Edge to engage in some of the guitar gymnastics that this song is known for, and compel the listener to nod their head in a motion that’s always made me think of soldiers in some evil empire, marching over the corpses of their victims. It’s a powerful and visceral song that’s had a long and varied history of live performances by the band, starting on the Joshua Tree tour in 1987. From the first show of that tour, until the start of the third leg of the Elevation Tour in 2001, the song did not miss a single U2 concert.

On the Joshua Tree tour, as well as the Lovetown tour which followed, the song was played in an arrangement mostly similar to the album version. As was done in the original studio recording, the song was the band’s opportunity to voice their opinions on America’s foreign policy at the time. During these live performances, Bono would shine a spotlight from the stage onto Edge as he played the guitar solo, after which, the light would be turned upon the audience, symbolizing a role reversal between the watchers and those being watched, but also, particularly in the US, representing the fact that the world was watching. Although the moment was staged, and not from an actual concert, the image on the cover of the Rattle and Hum album was meant to represent this moment of their concerts. Starting in 1991, on the ZooTV tour, the song was played in a style which was even more ferocious and heated, becoming an indictment against the rising interest in the neo-nazi movement, as well as against war in general, complete with burning swastikas on the screens in front of which the band would play. A personal favorite moment came at the end of some of the European shows, when Bono would call out individual nations by name which had allowed genocide to go unchallenged, while simultaneously calling for unity under the flag of goodness that all U2 fans uphold, by shouting out “Zoo-nited Nations! ZOO-NITED NATIONS!”, demanding that the sameness that we find as fans of this rock n roll band be enough to heal the rift between us.

On the Pop*Mart tour, “Bullet…” was given one of the most interesting overhauls of that tour, when it was performed in a slightly mellower, more controlled arrangement, which took advantage of the song’s reliance on bass and drums to incorporate some hip-hop stylings. To go a long with this mood, Bono’s on-stage antics were more lighthearted, poking fun at war-mongering governments as opposed to reacting with anger. I remember reading some particularly interesting debate at the time, on some of the U2 fan forums on the web, contrasting this performance to the ones that had come before.

For the Elevation tour, starting in 2001, the song became the centerpiece for the band’s pro-gun-control statements. A short video was played near the start of most performances of the song which contrasted some statements from NRA leader Charlton Heston with some statistics concerning gun-related deaths in the US, and the performances that followed were appropriately chaotic, dark and moody, and often climaxed with Patti Smith and David Bowie snippets along with free-associated references to TV addiction and John Lennon and his murder in 1980, at the hands of a crazed gunman in the streets of  New York City. As I mentioned above, the song did miss one show of this tour, the first show immediately following the September 11th attacks of 2001, which I the band correctly interpreted as being a time for healing, not anger.

In 2005, “Bullet the Blue Sky” returned once more, albeit in a more subdued style, as part of a section of the set-list which the band devoted to protesting war. Sandwiched between “Sunday Bloody Sunday” and “Running to Stand Still”, the once furious “Bullet the Blue Sky” served as a blues-y bridge between moods, transitioning from anger to sorrow. Many fans still complain today about how strongly they disliked this version of the song, but I always felt that we’d heard it fierce and angry so many times before, it was nice to hear it played differently. Unfortunately, it seems that the song was so poorly received that the band made the decision to retire the song following the Vertigo tour. It’s true that as people age, they become less angry, less combative and more prone to introspection, to thinking things through rather than simply reacting, and I think that as the band members’ viewpoints have  changed over the years, so have the feelings that once fueled the hostility behind Bullet’s earlier performances. Since the fans have made it clear that they don’t want to hear a more thoughtful rendition of this song, I think that the band will choose to not play the song again rather than play it in a style that they may no longer feel as truly or deeply as they once did.