Of course, like all U2 fans, my mind is on the ongoing saga concerning the long-awaited 13th album. Is it delayed, or isn’t it? What if it never comes out – does that mean the band will never tour 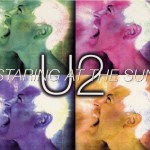 again? I don’t need to rehash the whole painful debacle for you, but it did get me thinking about what happened the last time U2 rushed an album out before they were ready. I truly love Pop, despite all the bad press, and I feel that It contains some fabulous songs, songs that I really wish the band would revisit live, like “Gone”, “Please”, and “Staring at the Sun”. That last one is the one I want to talk about today. I think that as far as straight, radio-friendly pop music goes, it’s among the best the band’s ever recorded. It’s got a great guitar part, some real heavy lyrics, and a hook that qualifies as an honest-to-goodness ear-worm. I used to work at a record store, and when the Best of 1990-2000 set was released, we had an in-store promo copy that I made sure was played several times a day for at least a month. “Staring at the Sun” was the song on that promo that those who were unfamiliar with U2 came to enjoy the most, out of everything on that disc. More than “Beautiful Day”, “Mysterious Ways”, “One”, or any of the other songs on that Best of album that we might think of as obvious favorites, so I honestly believe in the song, as both an unappreciated U2 classic and a song with genuine crossover appeal. When Staring at the Sun made it’s live debut, though, back in April, 1997, at the first Pop*Mart show – it sounded like crap. The story goes that U2 were so confident as they were recording Pop that they told Paul McGuinness to go ahead and schedule the tour. As the tour dates loomed closer and closer, though, the 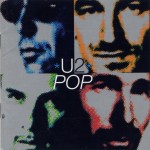 album still wasn’t done, and they ended up using the time that should have been spent rehearsing for the tour, finishing the album. The tour, especially at the early dates, suffered. “Staring at the Sun”, especially that first night, sounded like each member of the band was playing a different song, and playing them all poorly. It was so bad that they actually stopped halfway through and tried the song again. The second try that night was better, for sure – the tempo was improved, and the band were all on the same page – but it still sounded rough. It sounded like they hadn’t rehearsed it properly, which was exactly the case. The band continued to work on the song over the next month or so, and it did improve to the point that listening back today doesn’t make me cringe in embarrassment. They even nailed it once or twice, (May 22nd is probably my favorite performance of this arrangement) but on other nights it was nearly as bad as that first attempt (May 14th actually saw a repeat of the “stop partway through and start over” technique). Finally, on June 1st, they seem to have had enough. That night, the song was first played in it’s now familiar acoustic arrangement, by just Bono and Edge, which was the version that was played every night for the remainder of the Pop*Mart tour. This stripped-back arrangement has undeniable appeal, with some lovely polyphonous vocals from the singer and guitarist, who I’ve always thought harmonized wonderfully. The band obviously felt the same way, as recordings of this style have even seen a couple of official releases, most notably on 1997’s Pop*Heart EP, and the Hasta La Vista, Baby fan club release from 2000. 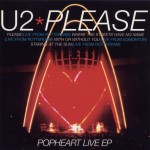 At the start of the band’s next tour, 2001’s Elevation Tour, the band seemed determined to treat Pop just like any other album, continuing to play favorites from it on subsequent tours. So it was that the first night of the Elevation Tour, March 24, 2001, did include a performance of “Staring at the Sun”, albeit a weird one. During that night’s “Discotheque”, another hold-over from Pop, as the band entered what would normally be the bridge, they instead segued into a strange semi-snippet of “Staring at the Sun”. Over some shimmery guitar doodles from Edge, Bono began the first verse of “Staring…”,and then, as the instrumental backing gradually faded away, the audience’s voices joined in on the chorus for a rousing singalong. I confess that at the time, I didn’t know quite what to make of this performance, and the passage of time has done little to make it sound better. As I stated above, I love the song, and, like much of U2’s music, the chorus lends itself well to audience participation, but the mood of “Staring at the Sun” is so drastically different from that of “Discotheque”, the medley has always felt uncomfortable and strangely forced to me. The band continued with this arrangement periodically during the first leg of the Elevation Tour, and into the second leg, progressively playing it less and less as the tour went on, until eventually abandoning it altogether in favor of a very infrequent, sparse acoustic rendition that had more in common with that favored on the Pop*Mart Tour. Since the end of the Elevation Tour in December of 2001, “Staring at the Sun” has disappeared entirely from U2’s set-lists, as has most of the Pop album, unfortunately. I’m as much in the dark as anyone as to what will happen next for U2, but I have to say, I just don’t believe that we’ve seen the last of our favorite rock band. When they do tour again, the band seem perfectly 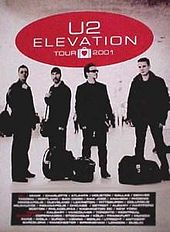 content to pretend that Pop never happened at all, so whether they’ll ever play anything from that album again remains a mystery, but if they do decide to resurrect anything from Pop, “Staring at the Sun” would have to be on their short-list, thanks to the success they’ve had with the acoustic arrangement in the past. What I am certain of, though, is this: I’d much rather them take their time with whatever they’re up to in the studio right now, until they’re satisfied. That way, not only will the eventual tour be the best it can possibly be, but the album won’t have to contend with the stigma that Pop carries, and we can count on hearing our favorites performed well into the future.